How to Save on Airfares 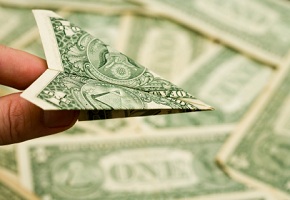 You know how TMZ shows you side-by-side photos of D-List celebrities and asks you, “What’s the Big Frigin’ Difference?” Now do that with the airlines – look for the differences between low-cost carriers like JetBlue and Southwest and legacy airlines such as American or United. Not much difference (but don’t miss my tips to save money, below).

Fewer Amenities on All Airlines

A good example would be the things you used to get for nothing on the big airlines. Today most legacy airlines – and the discounters – charge a fee for the following items:

Another legacy/low-cost airline difference that’s disappearing: the wide gap in ticket prices. Last week I looked at round-trip airfares from Los Angeles to Salt Lake City for the same dates in December, and here’s what I found:

As you can see, the above prices run counter to conventional wisdom that the discounters always have the cheaper prices. What’s this all about? To quote a former commander-in-chief, “it’s the economy, stupid.”

The blurring of the line between discount airlines and legacy carriers began with 9/11 and continued through a period of rising oil prices and the 2008 recession. It was actually a pretty good decade for some of the discounters, and if you were running one of the old-line airlines, you didn’t have to be a rocket scientist to figure out it might pay to be more like them. The first experiments flopped as the big airlines created their own versions of discounters – remember United’s Ted and Delta’s Song? Then they simply remade the original product by slashing amenities in favor of fees and even more closely aligning airfare prices. The price blur is partly a byproduct of our increasingly competitive world of online shopping and since consumers can compare airfare prices, why pay more? Airlines understand this and know they must stay competitive to survive.

Despite the blurring – the increasing lack of differences in this changing world of airlines – shoppers can still find cheap flights.

Shop Tuesdays: Traditionally, airfare sales are launched early Tuesday and by about 3 p.m. eastern time, the others have matched prices to stay competitive; that’s the time to shop.

Fly in and out of large airports: Hub airports have more flights and are generally cheaper – if a larger airport is within an hour or two’s drive of your hometown airport, compare prices and see if a little extra time on the road is worth it.

Compare non-stops to connecting flights: In most cases, you pay a premium of between 20% and 60% for a non-stop flight – only you can say if the convenience is worth it.

Be flexible: Often the cheapest flights are on Tuesdays and Wednesdays, and sometimes dirt cheap fares are available on overnight flights or at dawn. If you are flexible enough to take advantage of these deals, you can save big.