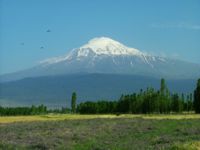 Anatolia (Turkish: Anadolu) is a large, roughly rectangular peninsula situated bridge like between Europe and Asia. The Anatolian part of Turkey accounts for 97% of the country’s area. It is also known as Asia Minor, Asiatic Turkey or the Anatolian Plateau. The term Anatolia is most frequently used in specific reference to the large, semiarid central plateau, which is rimmed by hills and mountains that in many places limit access to the fertile, densely settled coastal regions.

Turkey’s geographical location, which features the only city to straddle two continents, Istanbul, has made it an ideal destination for living and doing business for centuries. Connecting two continents by a body of water known as the Bosphorus, Turkey is home to many ethnic backgrounds, religions and cultures. With the great cultural treasure that holds artifacts, traditions and literature, Turkey is a melting pot of many cultures and peoples. Due to its colorful and long history, this beautiful country is also a mix of old and new, eastern and western, worlds. Tourists looking to enjoy the beach towns in the summer and history buffs that want to explore a country with a rich and dynamic history most frequently visit Turkey. The buzz has increased as of late due to the news that Istanbul will be the Cultural Capital of Europe in 2010, a prestigious and appropriate title that the city has earned through many positive changes. Though the Grand Bazaar, the Bosphorus and the cuisine impress tourists, the hospitality of the citizens is one of the most pleasant and alluring aspects of the country.

The Black Sea region has a steep, rocky coast with rivers that cascade through the gorges of the coastal ranges. A few larger rivers, those cutting back through the Pontic Mountains (Do?u Karadeniz Da?lar?), have tributaries that flow in broad, elevated basins. Access inland from the coast is limited to a few narrow valleys because mountain ridges, with elevations of 1,525 to 1,800 meters in the west and 3,000 to 4,000 meters in the east in Kaçkar Mountains, form an almost unbroken wall separating the coast from the interior. The higher slopes facing northwest tend to be densely forested. Because of these natural conditions, the Black Sea coast historically has been isolated from Anatolia.

Running from Zonguldak in the west to Rize in the east, the narrow coastal strip widens at several places into fertile, intensely cultivated deltas. The Samsun area, close to the midpoint, is a major tobacco-growing region; east of it are numerous citrus groves. East of Samsun, the area around Trabzon is world-renowned for the production of hazelnuts, and farther east the Rize region has numerous tea plantations. All cultivable areas, including mountain slopes wherever they are not too steep, are sown or used as pasture. The mild, damp climate of the Black Sea coast makes commercial farming profitable. The western part of the Black Sea region, especially the Zonguldak area, is a center of coal mining and heavy industry.

The North Anatolian Mountains in the north are an interrupted chain of folded highlands that generally parallel the Black Sea coast. In the west, the mountains tend to be low, with elevations rarely exceeding 1,500 meters, but they rise in an easterly direction to heights greater than 3,000 meters south of Rize. Lengthy, troughlike valleys and basins characterize the mountains. Rivers flow from the mountains toward the Black Sea. The southern slopes—facing the Anatolian Plateau—are mostly unwooded, but the northern slopes contain dense growths of both deciduous and evergreen trees.

Densely populated, this area includes the cities of Istanbul and Edirne. The Bosphorus, which links the Sea of Marmara and the Black Sea, is about twenty-five kilometers long and averages 1.5 kilometers in width but narrows in places to less than 1000 meters. There are two suspension bridges over the Bosphorus, both its Asian and European banks rise steeply from the water and form a succession of cliffs, coves, and nearly landlocked bays. Most of the shores are densely wooded and are marked by numerous small towns and villages. The Dardanelles Strait, which links the Sea of Marmara and the Aegean Sea, is approximately forty kilometers long and increases in width toward the south. Unlike the Bosphorus, the Dardanelles has fewer settlements along its shores. The Saros Bay is located near the Gallipoli peninsula and is famous for its clean beaches. It is a favourite spot among scuba divers for the richness of its underwater fauna and is becoming increasingly popular due to its vicinity to Istanbul.

The most important valleys are the Kocaeli Valley, the Bursa Ovasi (Bursa Basin), and the Plains of Troy (historically known as the Troad.) The valley lowlands around Bursa is densely populated.

Aegean Region
Located on the western side of Anatolia, the Aegean region has a fertile soil and a typically Mediterranean climate; with mild, wet winters and hot, dry summers. The broad, cultivated valley lowlands contain about half of the country’s richest farmlands.

The largest city in the Aegean Region of Turkey is Izmir, which is also the country’s third largest city and a major manufacturing center; as well as its second largest port after Istanbul. 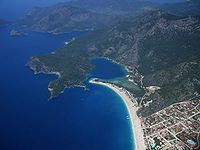 Olive and olive oil production is particularly important for the economy of the region. The seaside town of Ayvalik and numerous towns in the provinces of Balkesir, Uzmir and Aydin are particularly famous for their olive oil and related products; such as soap and cosmetics.

The region also has many important centers of tourism which are known both for their historic monuments and for the beauty of their beaches; such as Assos, Ayvalik, Bergama, Foça, uzmir, Çeime, Sardis, Ephesus, Kuadas?, Didim, Miletus, Bodrum, Marmaris, Datça and Fethiye.

Toward the east, the extensive plains around Adana (Cicillian plains or Turkish: Çukurova), Turkey’s fifth most populous city, consist largely of reclaimed flood lands. In general, rivers have not cut valleys to the sea in the western part of the region. Historically, movement inland from the western Mediterranean coast was difficult. East of Adana, much of the coastal plain has limestone features such as collapsed caverns and sinkholes. Between Adana and Antalya, the Taurus Mountains rise sharply from the coast to high elevations. Other than Adana, Antalya, and Mersin, the Mediterranean coast has few major cities, although it has numerous farming villages. 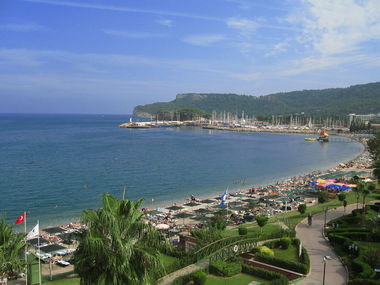 Paralleling the Mediterranean coast, the Taurus Mountains (Turkish: Toros Da?lar?) are Turkey’s second chain of folded mountains. The range rises just inland from the coast and trends generally in an easterly direction until it reaches the Arabian Platform, where it arcs around the northern side of the platform. The Taurus Mountains are more rugged and less dissected by rivers than the Pontus Mountains and historically have served as a barrier to human movement inland from the Mediterranean coast except where there are mountain passes such as the historic Cilician Gates (Gülek Pass), northwest of Adana.

Stretching inland from the Aegean coastal plain, the Central Anatolian occupies the area between the two zones of the folded mountains, extending east to the point where the two ranges converge. The plateau-like, semiarid highlands of Anatolia are considered the heartland of the country. The region varies in elevation from 600 to 1,200 meters from west to east. The two largest basins on the plateau are the Konya Ovasi and the basin occupied by the large salt lake, Tuz Gölü. Both basins are characterized by inland drainage. Wooded areas are confined to the northwest and northeast of the plateau. Rain-fed cultivation is widespread, with wheat being the principal crop. Irrigated agriculture is restricted to the areas surrounding rivers and wherever sufficient underground water is available. Important irrigated crops include barley, corn, cotton, various fruits, grapes, opium poppies, sugar beets, roses, and tobacco. There also is extensive grazing throughout the plateau.

Central Anatolia receives little annual rainfall. For instance, the semiarid center of the plateau receives an average yearly precipitation of only 300 millimeters. However, actual rainfall from year to year is irregular and occasionally may be less than 200 millimeters, leading to severe reductions in crop yields for both rain-fed and irrigated agriculture. In years of low rainfall, stock losses also can be high. Overgrazing has contributed to soil erosion on the plateau. During the summers, frequent dust storms blow a fine yellow powder across the plateau. Locusts occasionally ravage the eastern area in April and May. In general, the plateau experiences extreme heat, with almost no rainfall in summer and cold weather with heavy snow in winter.

Frequently interspersed throughout the folded mountains, and also situated on the Anatolian Plateau, are well-defined basins, which the Turks call ova . Some are no more than a widening of a stream valley; others, such as the Konya Ovasi, are large basins of inland drainage or are the result of limestone erosion. Most of the basins take their names from cities or towns located at their rims. Where a lake has formed within the basin, the water body is usually saline as a result of the internal drainage—the water has no outlet to the sea.

Eastern Anatolia, where the Pontus and Taurus mountain ranges converge, is rugged country with higher elevations, a more severe climate, and greater precipitation than are found on the Anatolian Plateau. The region is known as the Anti-Taurus, and the average elevation of its peaks exceeds 3,000 meters. Mount

Ararat, at 5,137 meters the highest point in Turkey, is located in the Anti-Taurus. Many of the Anti-Taurus peaks apparently are recently extinct volcanoes, to judge from extensive lava flows. Turkey’s largest lake, Lake Van, is situated in the mountains at an elevation of 1,546 meters. The headwaters of three major rivers arise in the Anti-Taurus: the east-flowing Aras, which pours into the Caspian Sea; the south-flowing Euphrates; and the south-flowing Tigris, which eventually joins the Euphrates in Iraq before emptying into the Persian Gulf. Several small streams that empty into the Black Sea or landlocked Lake Van also originate in these mountains.

In addition to its rugged mountains, the area is known for severe winters with heavy snowfalls. The few valleys and plains in these mountains tend to be fertile and to support diverse agriculture. The main basin is the Mus Valley, west of Lake Van. Narrow valleys also lie at the foot of the lofty peaks along river corridors.

Southeast Anatolia is south of the Anti-Taurus Mountains. It is a region of rolling hills and a broad plateau surface that extends into Syria. Elevations decrease gradually, from about 800 meters in the north to about 500 meters in the south. Traditionally, wheat and barley were the main crops of the region, but the inauguration of major new irrigation projects in the 1980s has led to greater agricultural diversity and development.

Turkey’s diverse regions have different climates, with the weather system on the coasts contrasting with that prevailing in the interior. The Aegean and Mediterranean coasts have cool, rainy winters and hot, moderately dry summers. Annual precipitation in those areas varies from 580 to 1,300 millimeters (22.8 to 51.2 in), depending on location. Generally, rainfall is less to the east. The Black Sea coast receives the greatest amount of precipitation and is the only region of Turkey that receives high precipitation throughout the year. The eastern part of that coast averages 2,500 millimeters (98.4 in) annually which is the highest precipitation in the country.