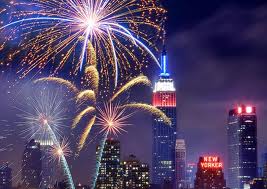 Beginning at approximately 9 p.m., Macy’s will have fireworks being released from four barges in the Hudson River. It’s the 36th Annual Macy’s Fireworks display and this year’s theme is Ignite the Night. This year’s fireworks soundtrack has been dubbed “America’s Mixtape,” and will feature both patriotic and pop standards that will be performed in sync with the fireworks. The music can be heard on 1010 WINS and Fresh 102.7. The night’s line-up will include performances by Katy Perry and Kenny Chesney. If you’re not in the area, NBC will broadcast the fireworks live beginning at 9 p.m. EST.

Where Can You Best View The Macy’s Fourth of July Fireworks?
Fireworks will be launched from four barges in the Hudson River between 18th Street and 43rd Street. The best places to see the fireworks will be along the West Side Highway on the north-bound lanes and 12th Avenue between 14th and 59th Streets; some side streets between 11th and 12th Avenues and at Pier 84 (access from 44th Street). You can also view the Macy’s Fourth of July fireworks from anywhere you have an unobstructed view of the sky above the Hudson River. See the Fourth of July Fireworks Map for details on viewing access and the best spots for seeing them live!