Paris in Spring “The City of Love” 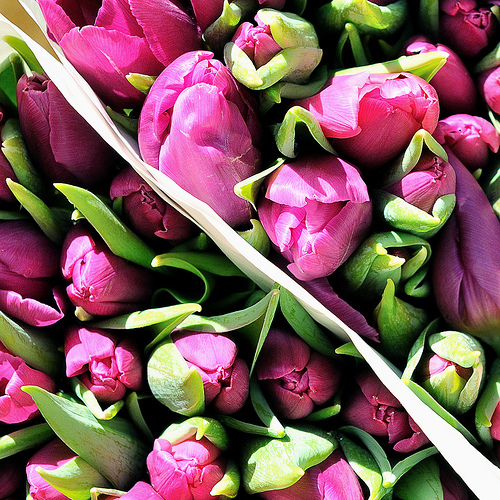 Paris is popular year-round, as mentioned in my post “Paris the City of Love”, there is a low season as far as prices goes. In November you will find a lot of good bargains in Hotels and flights, you will find special discount on almost everything. So you’re more likely to save money on your Paris airfare by traveling in late summer and autumn.

Paris in spring is a delight. After a few months of cold, and a little rain, the sight of new flowers and more consistent sunlight is always welcome – to Parisians and tourists. 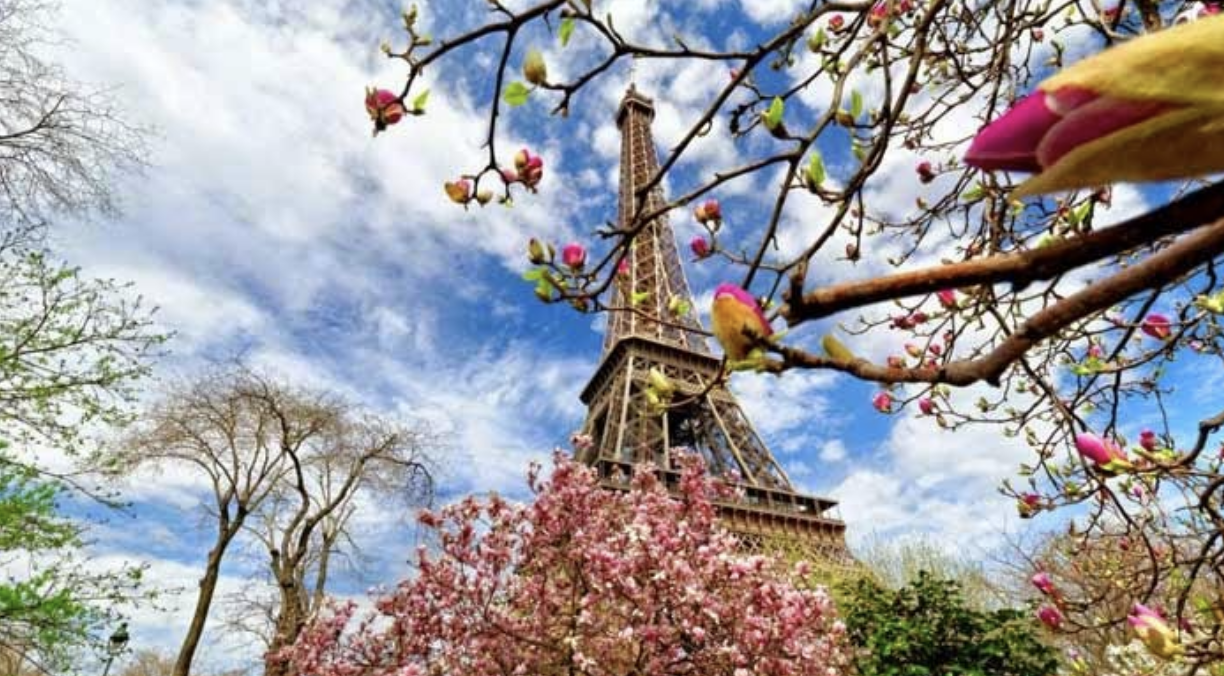 There is a chance of getting rain in early spring. But the average temperatures climb noticeably from February into March. The nights are still cool, so bringing warm clothes is good policy. Pay attention to current Paris weather forecasts as you’re coming up to your trip, as much of Europe has been experiencing unseasonably warm weather in the Spring in the last few years. 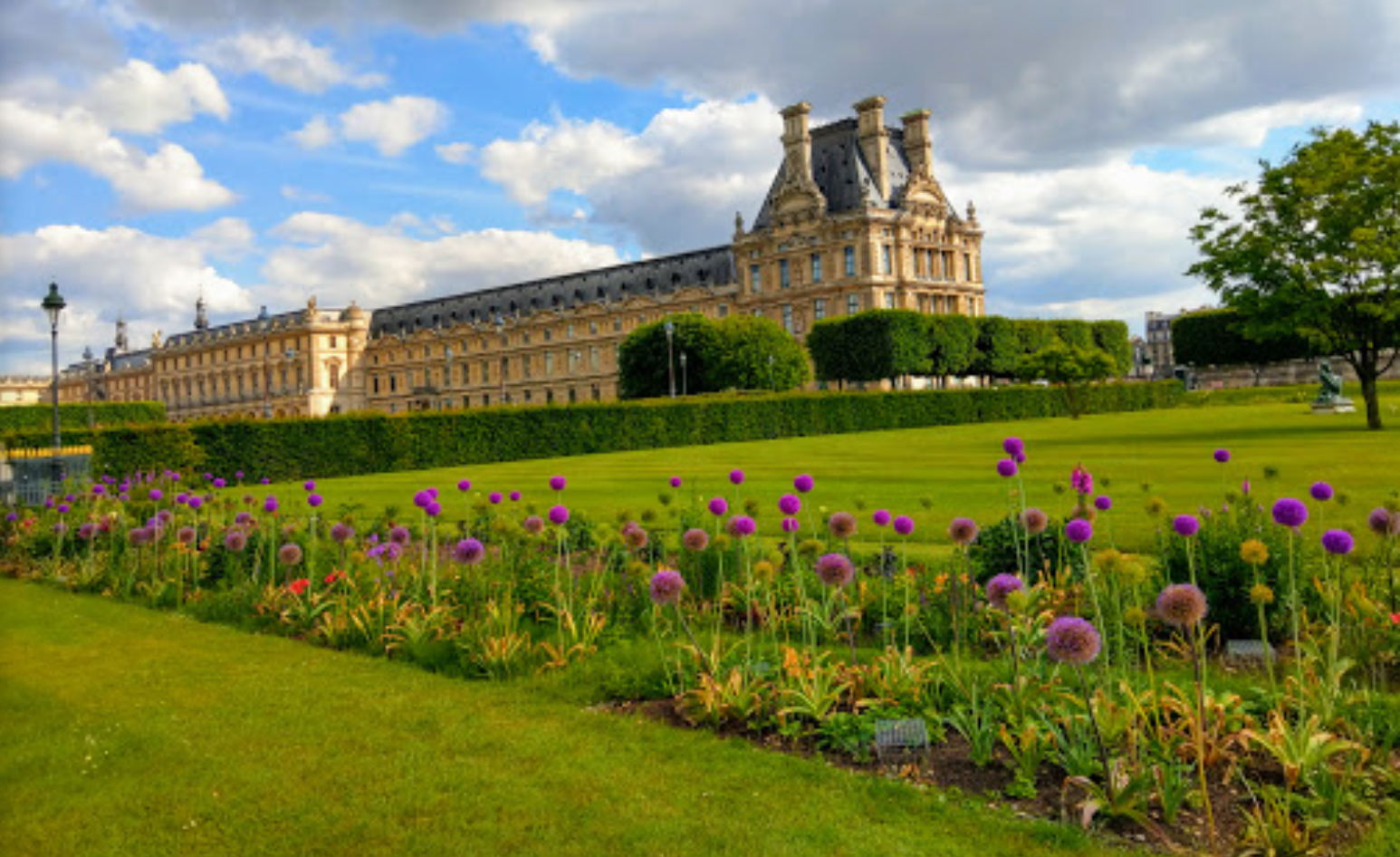 This formal beauty in the heart of the city links the Louvre with the Place de la Concorde, stretching along the north bank of the Seine.

The Tuileries Gardens get their name from the tile factories which previously stood on the site where Queen Catherine de Medici built the Palais des Tuileries in 1564. The famous gardener of King Louis XIV, André Le Nôtre, re-landscaped the gardens in 1664 to give them their current French formal garden style.

The gardens, which separate the Louvre from the Place de la Concorde, are a cultural walking place for Parisians and tourists where Maillol statues stand alongside those of Rodin or Giacometti. The gardens’ two ponds are perfect for relaxation. The Musée de l’Orangerie, where visitors can admire the works of Monet, is located south-west of Tuileries. From March to December, free tours in French are organized. For lovers of candyfloss, rides and thrills, go to the Fête des Tuileries from June to August. 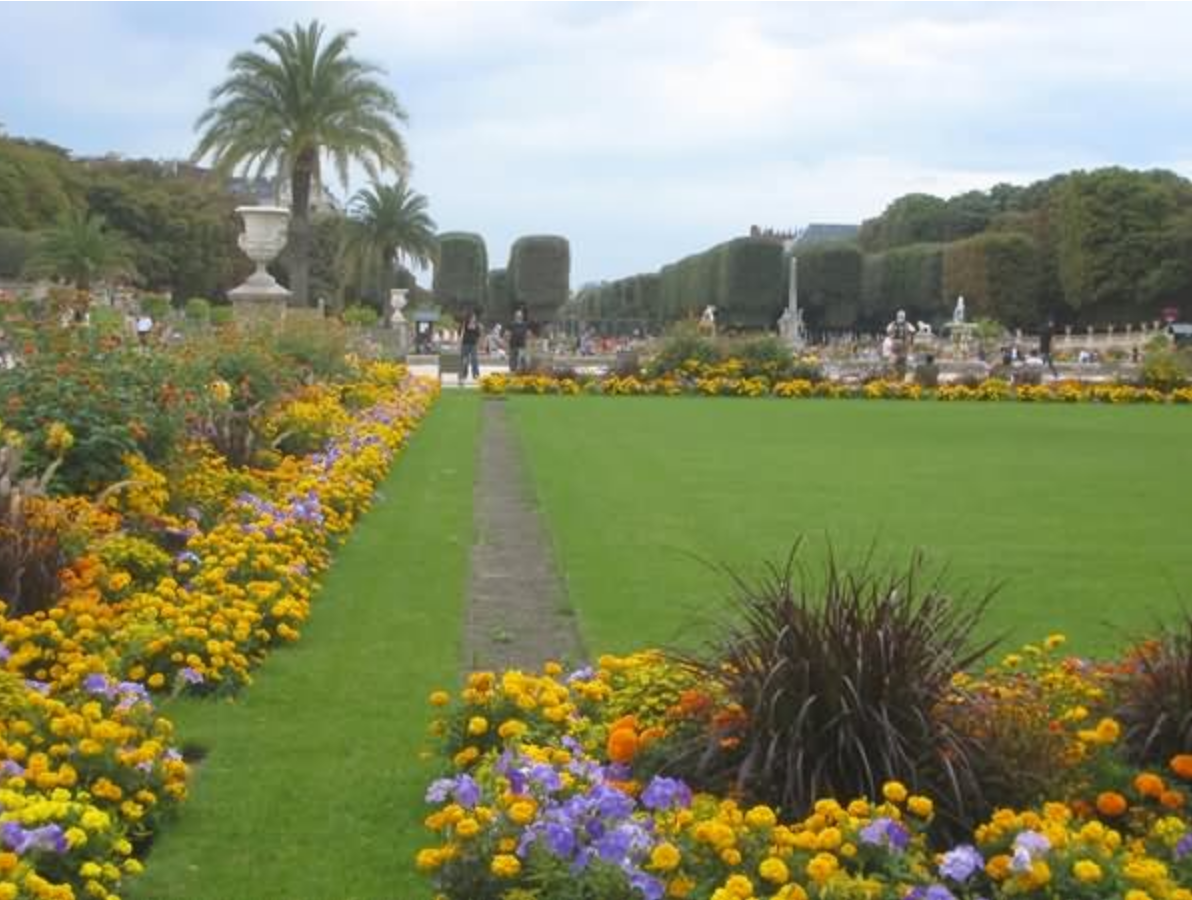 Jardin du Luxembourg is situated on the border between Saint-Germain-des-Prés and the Latin Quarter, the Luxembourg Gardens, inspired by the Boboli Gardens in Florence, were created upon the initiative of Queen Marie de Medici in 1612.

The gardens, which cover 25 hectares of land, are split into French gardens and English gardens. Between the two, lies a geometric forest and a large pond.

There is also an orchard with a variety of old and forgotten apples, an apiary for you to learn about bee-keeping and greenhouses with a collection of breathtaking orchids and a rose garden. The garden has 106 statues spread throughout the park, the monumental Medici fountain, the Orangerie and the Pavillon Davioud.

There are many activities and facilities for children such as puppets, rides and slides. Adults, whether they are Parisians or tourists, can play chess, tennis, and bridge or remote control boats. The cultural programme is characterized by free photography exhibitions on the garden railings and by concerts in the bandstand. You can read more in Paris official website of convention and Visitors Bureau 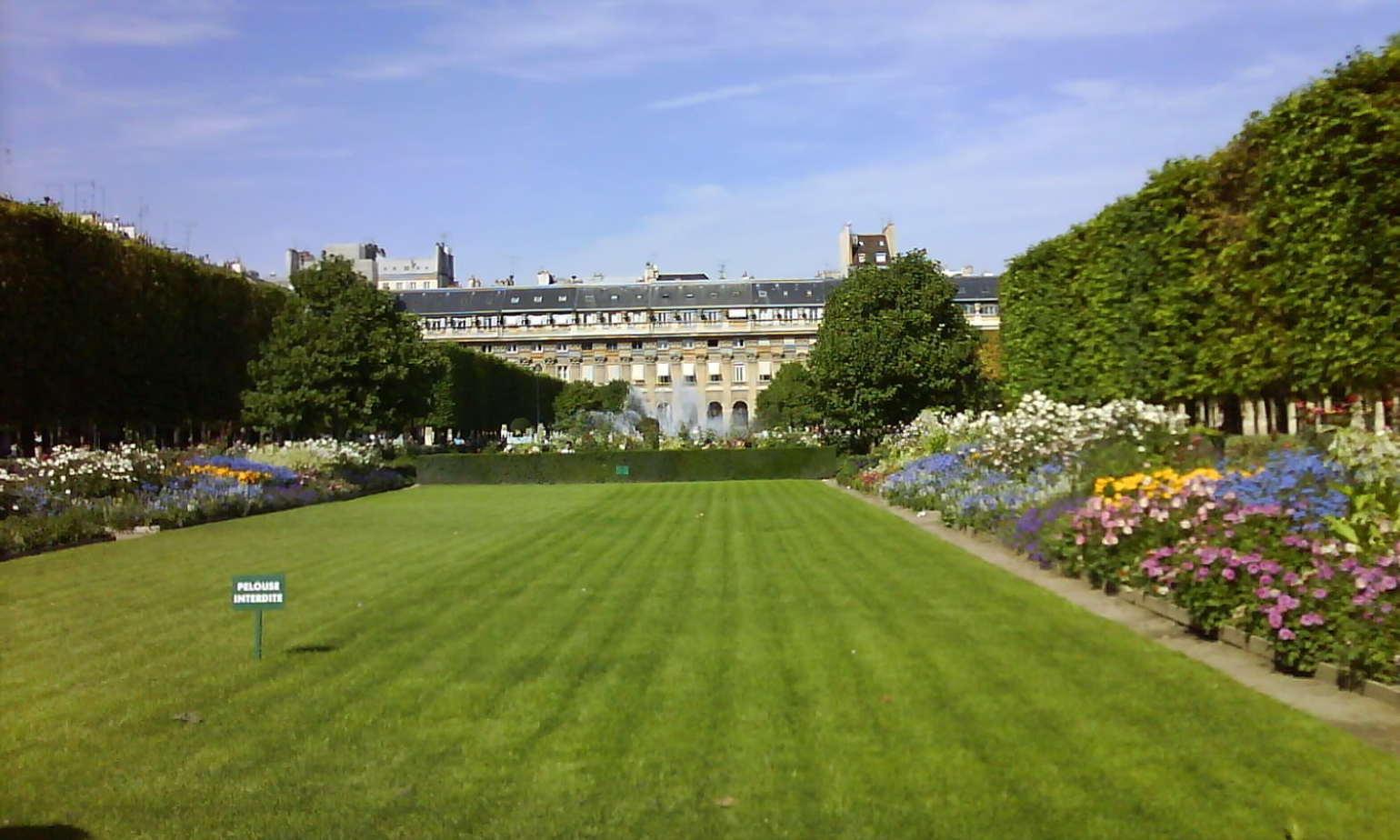 The Palais-Royal originally called the Palais-Cardinal, is a former royal palace located in the 1st arrondissement of Paris, France.

In 1830 the Cour d’Honneur was enclosed to the north by what was probably the most famous of Paris’s covered arcades, the Galerie d’Orléans. Demolished in the 1930s, its flanking rows of columns still stand between the Cour d’Honneur and the popular Palais-Royal Gardens. 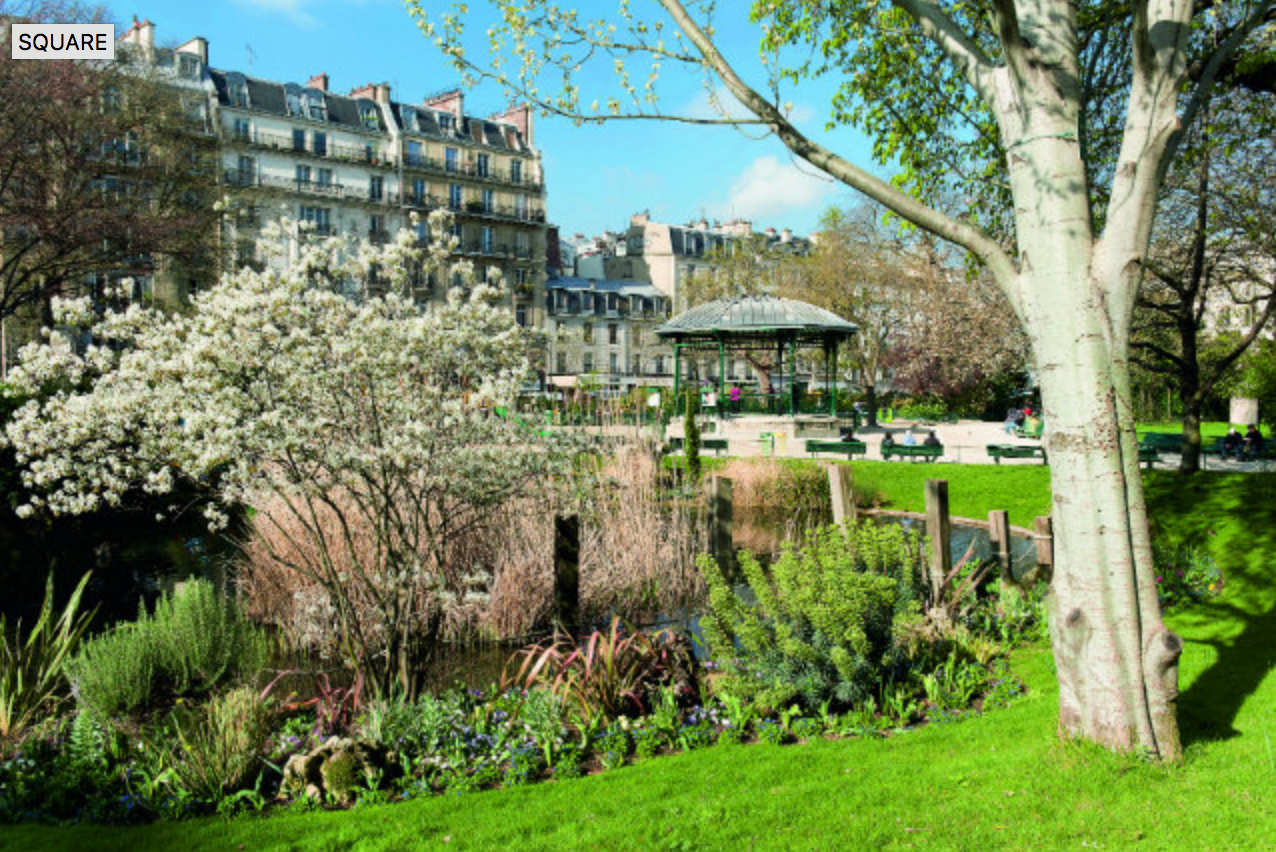 The Square du Temple is a garden in Paris, France in the 3rd arrondissement, established in 1857. It is one of 24 city squares planned and created by Georges-Eugène Haussmann and Jean-Charles Alphand. The Square occupies the site of a medieval fortress in Paris, built by the Knights Templar. Parts of the fortress were later used as a prison during the French Revolution, and then demolished by the mid 19th century. 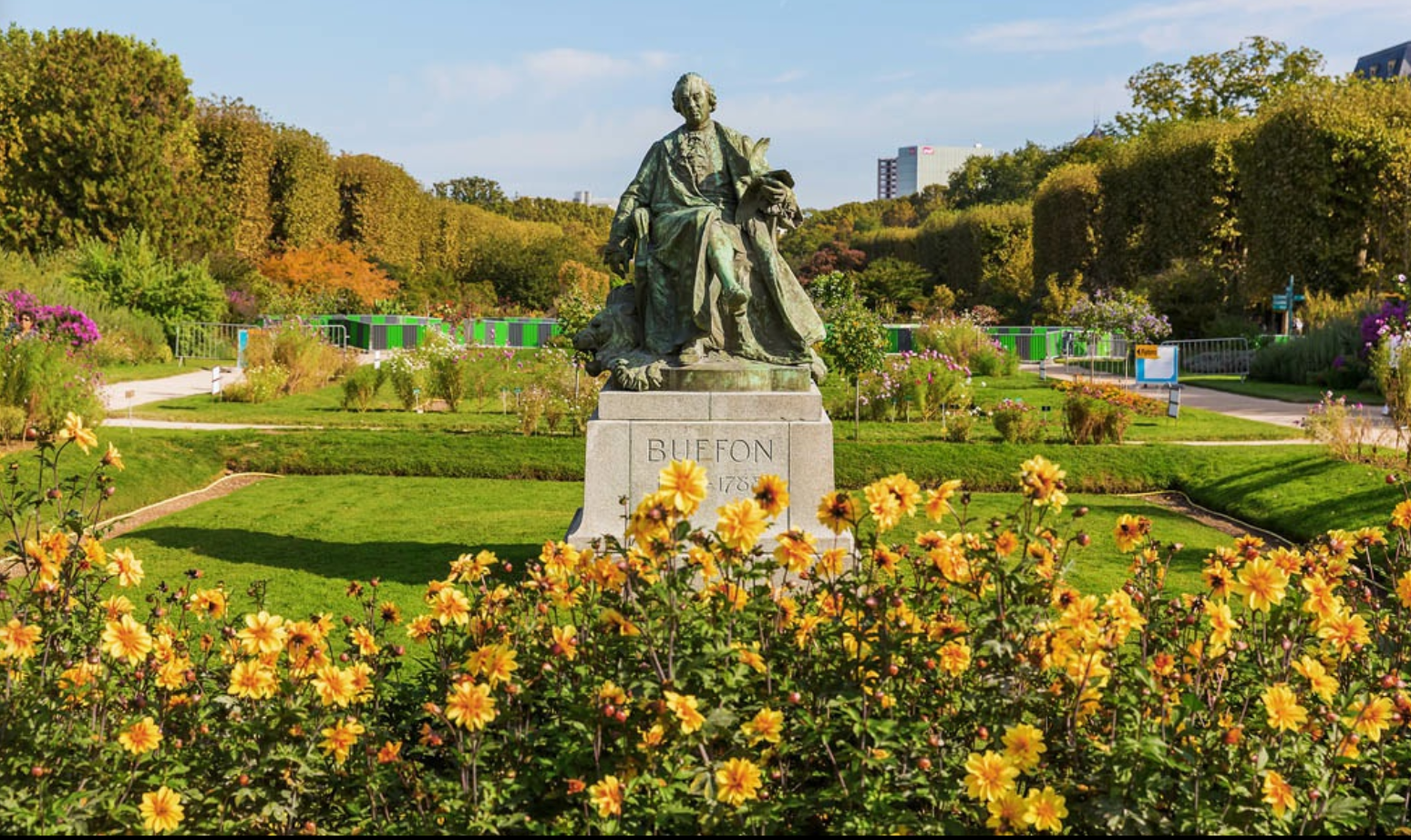 The Jardin des plantes (French pronunciation:  [?a?d?? d? pl??t]; French for ‘Garden of the Plants’), also known as the jardin des plantes de Paris when distinguished from other jardins des plantes in other cities, is the main botanical garden in France. The term Jardin des plantes is the official name in the present day, but it is in fact an elliptical form of Jardin royal des plantes médicinales (‘Royal Garden of the Medicinal Plants‘, which is related to the original purpose of the garden, back in the 17th century). 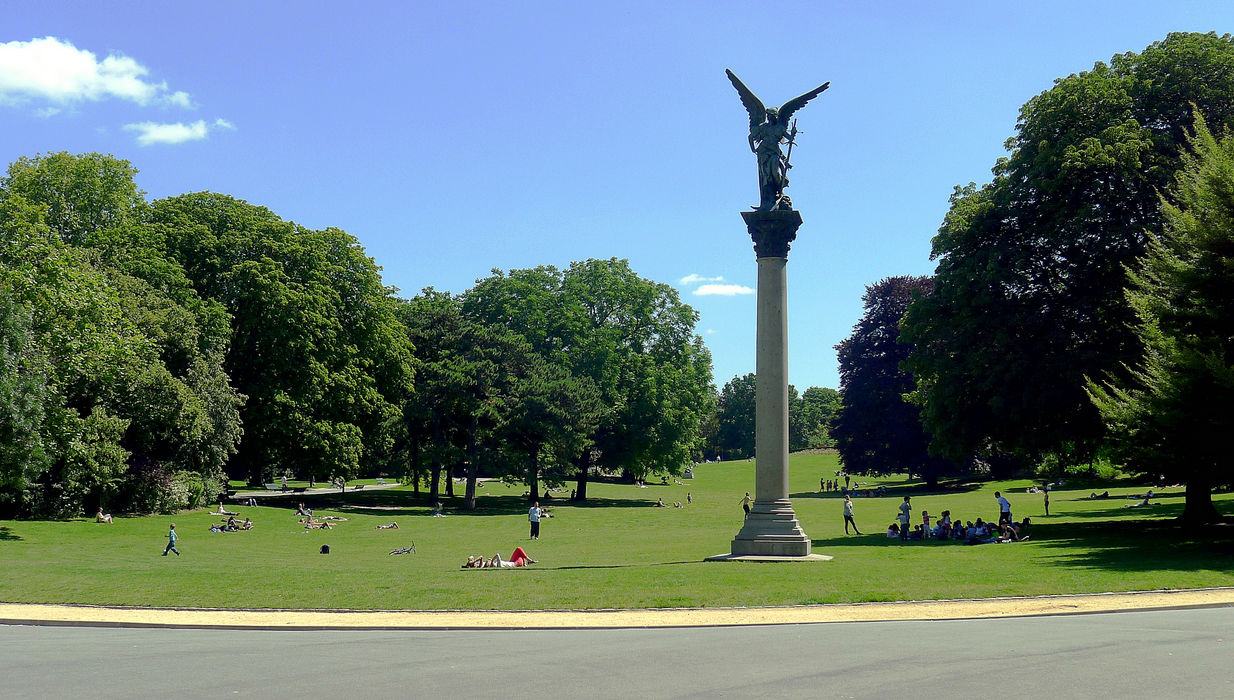 Parc Montsouris is a public park in the 14th arrondissement of Paris, at the southern edge of Paris directly south of the center. Opened in 1869, Parc Montsouris is one of the four large urban public parks, along with the Bois de Boulogne, the Bois de Vincennes and the Parc des Buttes Chaumont, created by Emperor Napoleon III and his Prefect of the Seine, Baron Haussmann, at each of the cardinal points of the compass around the city, in order to provide green space and recreation for the rapidly growing population of Paris. 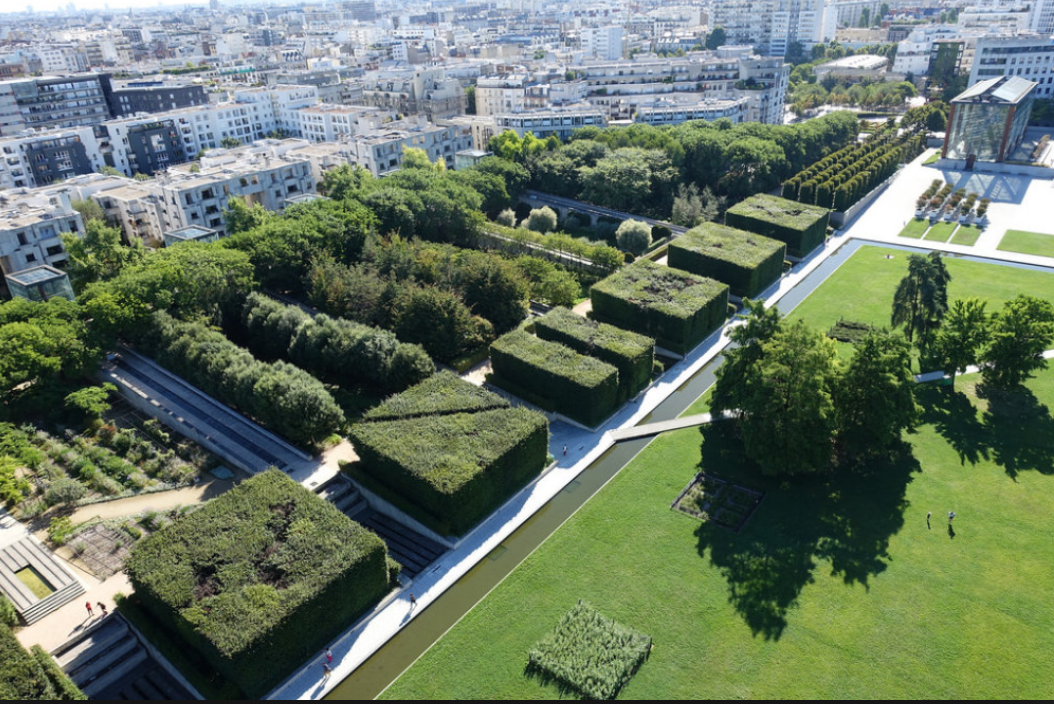 Parc André Citroën is a 14 hectares (35 acres) public park located on the left bank  of the river Seine in the 15th arrondissement of Paris.

Built on the site of a former Citroën automobile manufacturing plant, the park is named after company founder André Citroën. When it opened in 1992 it was the largest park to open in Paris in more than a century.

Getting Around Paris, The Paris Metro or Metropolitan

France has a terrific rail network that reaches almost every part of the country. If you would prefer to navigate around Paris and France by bus, inter-regional bus services are limited but buses are used extensively for short distance travel within regions.

Having your own vehicle can be expensive and is inconvenient in city centers where parking and traffic is problematic. Renting a car is expensive if you book on the spot but pre-booked and prepaid promotional rates are reasonable. 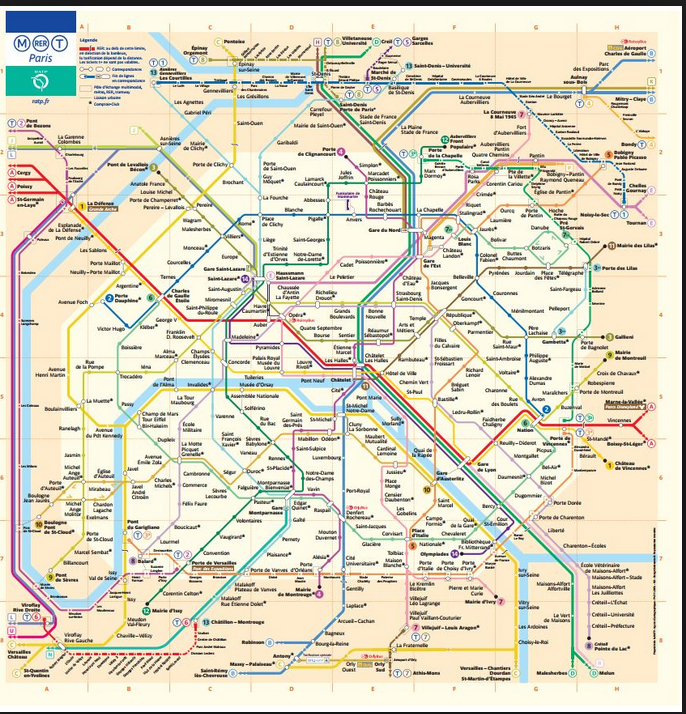 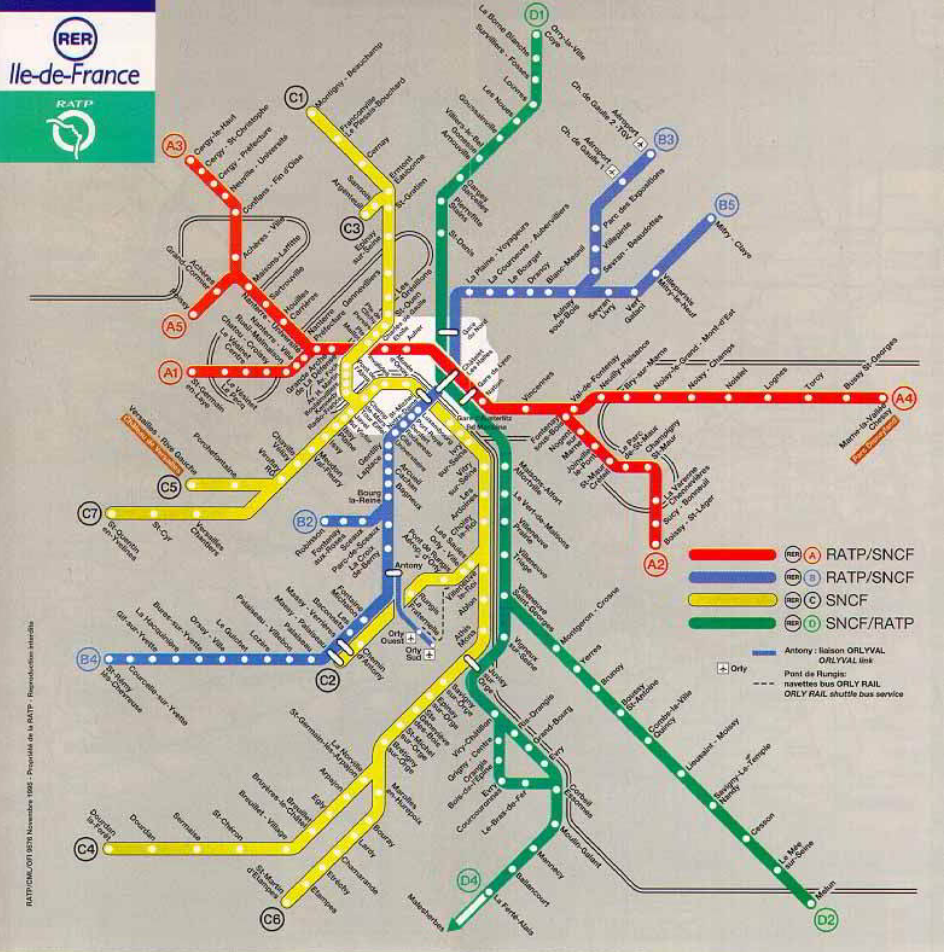 Paris is one of Europe’s most walkable cities with all of the city’s top attractions close together.

Even whe cheap transportaiton and Metro is budget-friendly and easy to use, with stops at all major tourist spots, I did walk all over the city without taking

any transportation except when coming back to my room to sleep! 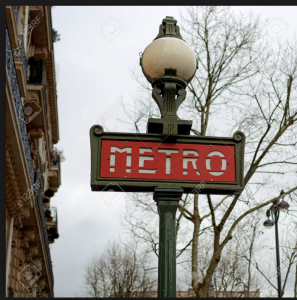 Taxis and Uber “at the time this original post was written, there was no Uber!”

You can hail taxis from the side of the road, but it may be difficult. Taxis aren’t legally allowed to pull over if you’re within 50 metres of a taxi stand, which you can find throughout the city. You can also call and book a taxi in advance.

Uber is available and costs EUR €40-80  from Charles de Gaulle Airport to the city center “it depends where in the city you are going to”. From Orly International Airport, Uber is EUR€30-50.

(French: Métro de Paris) is the rapid transit metro system in Paris. It has 16 lines, mostly underground, there are 300 stations. Since some are served by several lines, there are 384 stops in total.

Paris has one of the densest metro networks in the world, with 245 stations within 86.9 km2 of the City of Paris. Lines are numbered 1 to 14, with two minor lines, 3bis and 7bis. The minor lines were originally part of lines 3 and 7 but became independent.
Lines are identified on maps by number and color. Direction of travel is indicated by the destination terminus.

Paris is the second busiest metro system in Europe after Moscow It carries 4.5 million passengers a day, and an annual total of 1.388 billion (2007). Chatlet-Les Halles, with 5 Metro lines and three RER commuter rail lines.
The Paris subway system is the second oldest in the world 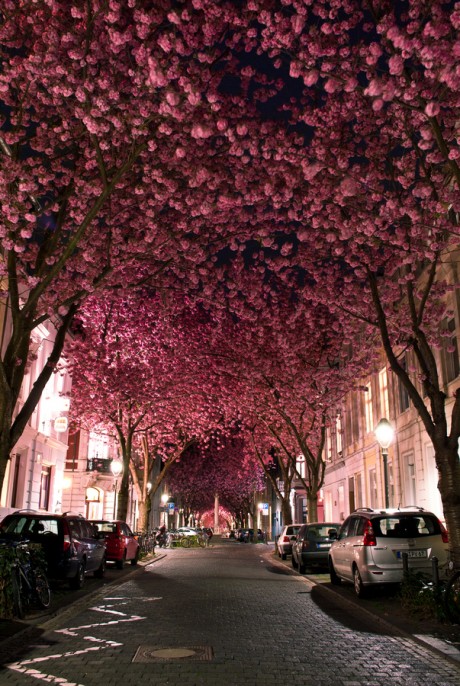 Why Paris in Spring?

I loved this poem by Sara Teasdale

I know the Bois is twinkling
In a sort of hazy sheen,
And down the Champs the gray old arch
Stands cold and still between.
But the walk is flecked with sunlight
Where the great acacias lean,
Oh, it’s Paris, it’s Paris,
And the leaves are growing green.

The sun’s gone in, the sparkle’s dead,
There falls a dash of rain,
But who would care when such an air
Comes blowing up the Seine?
And still, Ninette sits sewing
Beside her window-pane,
When it’s Paris, it’s Paris,
And spring-time come again. 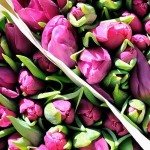 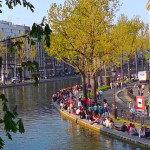 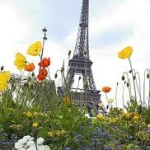 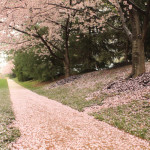 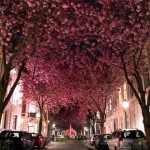 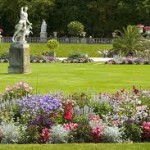 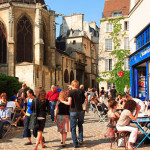 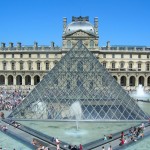 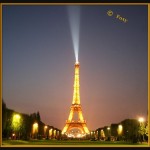 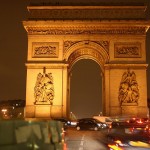 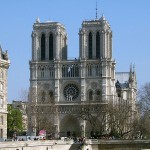 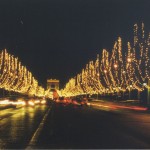 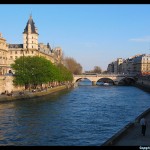 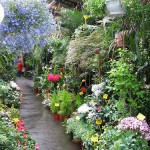 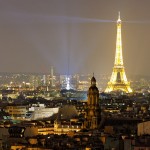 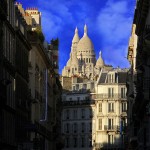