The Wonder Land of Socotra, Yemen 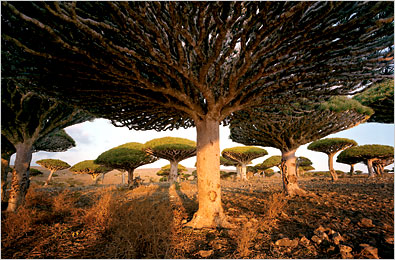 Rare dragon’s blood trees, found only on the island, which can grow for 300 years

The road to the forest of frankincense trees, on the Yemeni island of Socotra, is a rough one. From the passenger seat of a battered Toyota Land Cruiser, it looked like pure rock pile, on and on, up, down, over. Ahmed Said, my driver and guide, wrestled the wheel like a man engaged, surely and calmly, in a struggle to the death. When at last, after 90 minutes, he stopped and got out, we had traveled perhaps no more than five miles.

We stood on a rise overlooking a riverbed rushing with water. The ground underfoot was a rubble of granite boulders and chunks of sharp limestone karst. Small trees — short and gnarled, resembling mesquite — surrounded us. Ahmed approached one and pointed to an amber drop of sap oozing from its trunk: the essence of frankincense. Until that moment I’d had no clear idea what exactly frankincense was; nor that it derives from the sap of a tree; nor that, as Ahmed explained, Socotra is home to nine species of the tree, all unique to the island. I caught the drop of sap on my finger and inhaled a sharp, sweet fragrance; then I put it to my tongue. The torture of the drive was forgotten, and for the briefest moment, under the hot Yemeni sun, I tasted Christmas. 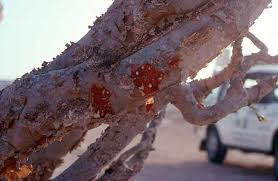 Situated 250 miles off the coast of Yemen, Socotra is the largest member of an archipelago of the same name, a four-island ellipsis that trails off the Horn of Africa into the Gulf of Aden. A mix of ancient granite massifs, limestone cliffs and red sandstone plateaus, the island brings to mind the tablelands of Arizona, if Arizona were no bigger than New York’s Long Island and surrounded by a sparkling turquoise sea.

Some 250 million years or more ago, when all the planet’s major landmasses were joined and most major life-forms were just a gleam in some evolutionary eye, Socotra already stood as an island apart. Ever since, it has been gathering birds, seeds and insects off the winds and cultivating one of the world’s most unusual collections of organisms. In addition to frankincense, Socotra is home to myrrh trees and several rare birds. Its marine life is a unique hybrid of species from the Red Sea, the Indian Ocean and the western Pacific. In the 1990s, a team of United Nations biologists conducted a survey of the archipelago’s flora and fauna. They counted nearly 700 endemic species, found nowhere else on earth; only Hawaii and the Galapagos Islands have more impressive numbers.

Lately Socotra has begun to attract a new and entirely foreign species — tourists. A modest airport went up in 1999. (Before then, the island could be reached only by cargo ship; from May to September, when monsoon winds whip up the sea, it could be cut off entirely.) That year, 140 travelers visited. The annual figure now exceeds 2,500: a paltry number compared with, say, the Galapagos, but on an island with only four hotels, two gas stations and a handful of flush toilets, it’s a veritable flood.

They — I should say “we” — constitute an experiment. Encouraged by a United Nations development plan, Socotra has opted to avoid mass tourism: no beachfront resorts; instead, small, locally owned hotels and beachfront campsites. The prize is that rarest of tourists, eco-tourists: those who know the little known and reach the hard to reach, who will come eager to see the Socotra warbler, the loggerhead turtle, the dragon’s blood tree — anything, please, but their own reflection.

Riding with Ahmed, it was immediately evident that, though the island is small in size, it cannot possibly be seen without a hired driver and guide, for the simple reason that there are few proper roads, fewer road signs and no road maps.

The first paved roads were built by the Yemeni government only two years ago: wide, open scabs on the landscape that stretch across the island yet see virtually no traffic. The new roads, it turned out, were a sore spot with Ahmed and the United Nations Socotra Archipelago Conservation and Development Programme. “The experience is so different if you spend 45 minutes on a road versus three or four hours,” Paul Scholte, the program’s technical adviser in Sana, Yemen’s capital, said to me. “The whole perception of the island changes due to the road.” Then there was the matter of placement. Only at the last minute did the S.C.D.P. manage to convince the government not to send the road through a stretch of coastline designated as a nature preserve. It’s fair to say that Socotra’s future may be read in the lines of its roads: how many, how wide, where they lead and who is encouraged to travel on them.

Ahmed took me to the beach that would have been paved over: shimmering blue water, powdery white sand and not a soul in sight. A ghost crab, pure white, with just its pin-stalk eyes peeking above the water like twin periscopes, drifted by on a current in the shallows. I watched it watch me and then bury itself in the sandy floor.

According to Scholte, roughly half of Socotra’s tourists are Italians, who seem mainly interested in the beaches: “Italians go because it’s new, it’s cheap, but not because it’s special.” The French and Germans, in contrast, go for special: they come to hike, visit the island’s nature preserves, maybe rent camels and spend several days trekking as a group across the Haghier mountain range at the center of the island.